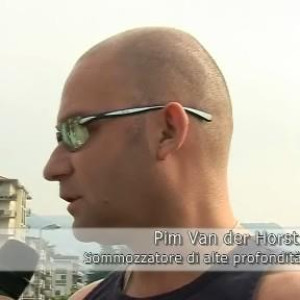 Pim started diving in 1982 with Falco, the club of the Tilburg University. He became instructor in 1992. Pim decided to start with a SCR (Dolphin) and later pick up the Inspiration (Classic) eCCR. For the Inspiration (which he bought second hand), he had to do his courses in the UK, with Kevin Gurr and Phil Short. They introduced him to the technical diving scene. Pim decided to become an IANTD instructor. In that period CCR's were banned by many diving centers and charters. Pim decided to concentrate and specialize in technical diving. Pim was trained by Tom Mount, Kevin Gurr, Phil Short, Ed Betts and Paul Lijnen. Pim started participating in and organizing of CCR expeditions like the Bunaken/Coelacanth Expedition, Yamashiro Expedition, Carpathia Expedition, Viminale Expedition, Victoria Expedition and Garibaldi Expedition. In 2008 (together with two Italians Mario Marconi and Alessandro Scuotto) Pim made a world record wreck dive to the wreck of the Milano in Lago Maggiore (Italy) on an Ouroboros eCCR. In 2009 he made the (unofficial) deepest dive on a mCCR (mini rEvo III). He is probably the only diver who did dives deeper then 200 mtr on different CCR's. In 2009 Pim became President of DIRrebreather. Pim published several books on (technical) diving and he publishes in the magazines Neptune (Russian) and Duikmagazine (Dutch). He has published the following books: DIRrebreather Manual, DIRrebreather Instructor Manual, DIRrebreather Student Manual, DIRrebreather Ultimate CCR Manual, DIRreberather Rescue Manual, Rebreathers Duiken Zonder Bellen, Technisch Duiken Encyclopedie, Tekdiving Een UItdagende Manier Van Duiken.